It’s almost spring, and Martha Haythorn is trying to decide where to go to school. She’s already been accepted to Georgia Tech, but she’s waiting to hear back from Clemson University before making her decision.

“I am graduating and going to college,” said Haythorn, a 20-year- old from Decatur. “I hope that everyone with a disability has the chance to do what I’m about to do.”

On February 18, five young self-advocates came together from across the state to celebrate the culmination of Tomorrow’s Leaders, a nine-month leadership development program for young people with disabilities organized by The Arc Georgia. At the top floor  of the historic Hurt Building in downtown Atlanta, the leaders were joined by family, mentors and other advocates for the completion of the program’s pilot run. 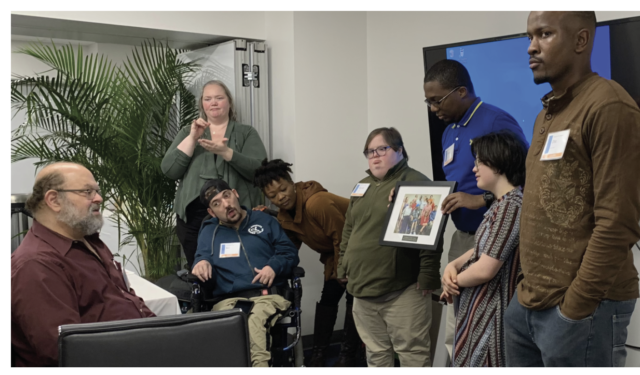 Haythorn was joined by Hannah Hibben, Ryan Lee, Otis Maffett and Ben Oxley to form the diverse first lass. They applied to Tomorrow’s Leaders last year and engaged with coaches and mentors for the duration to develop leadership, communication and advocacy skills.

“The intention of a mentor was to communicate and share your ideas with someone who didn’t have a disability and was in the area of your interest,” said Stacey Ramirez, the state director of  The Arc Georgia. “So, we start to expand the abilities of people with disabilities outside the circle.”

The program was run by Ramirez and funded largely through a grant from the Georgia Council on Developmental Disabilities (GCDD). The program also received funding from the American Association on Individuals with Developmental Disabilities (AAIDD). “Being a part of Tomorrow’s Leaders, I started sharing my gifts and talent with others,” said Maffett. “I didn’t force people or try to change them; I let my talent speak for itself.” 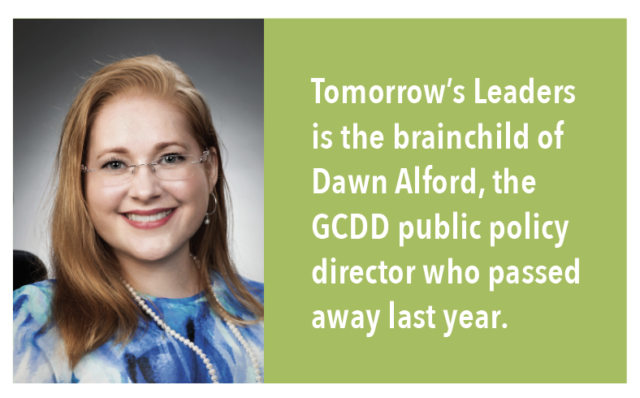 Tomorrow’s Leaders is the brainchild of Dawn Alford, the public policy director for GCDD who passed away last year.

Participants remembered and thanked Alford throughout the event, and the leaders gave Eric Jacobson, the executive director of GCDD, a framed photograph of the group to say thank you.

“You have to know that Dawn is looking down upon all of us as we’re doing this because this was her dream – this was what she wanted,” Jacobson said. “Her desire to see young people with disabilities take over her job when you get to that place… that’s what she was inspired by, so I think this is a perfect tribute to her.”

Aged 20 to 32, the leaders are as unique and varied as the wider community of people with disabilities. In practice, Tomorrow’s Leaders was individualized for each participant. Haythorn works as a policy intern for The Arc Georgia, and Ramirez was her mentor throughout the process.

Maffett writes poetry to keep his mind occupied, and he performed a song he wrote during the event with beautiful vibrato. Lee works at a pizzeria in Alpharetta, but he’s looking for a data-entry job. Hibben likes wrestling and tennis, and she gave a speech to the crowd at the event. Oxley has a sleeve of tattoos and recently took part in a documentary film He brought his friend Jeremy Williams to the event, a musician and artist who spoke on representation in the media.

During the event, the five participants presented what they had learned through the program and took questions from the audience. Through Tomorrow’s Leaders, they all grew as individuals and further developed their skillsets as advocates. “No one can tell you how to feel or what to feel. We can’t turn our emotions off,” Lee told Maffett after his presentation at the event.

“People treat us, as people with autism, like we don’t have feelings,” said Lee, who has written editorials for The Aspergian and Autism Speaks. “Just because you can’t see something doesn’t mean it’s not there.”

Before the celebration began, Maffett, Haythorn and Lee sat around a table and discussed prompts from conversation starter cards. One asked, “What would you do if you won the lottery?” Haythorn said she would go to Washington and offer to pay for Medicaid. Maffett said he would buy his mom a new house and he wouldn’t tell anyone because that’s the smart way to do it. 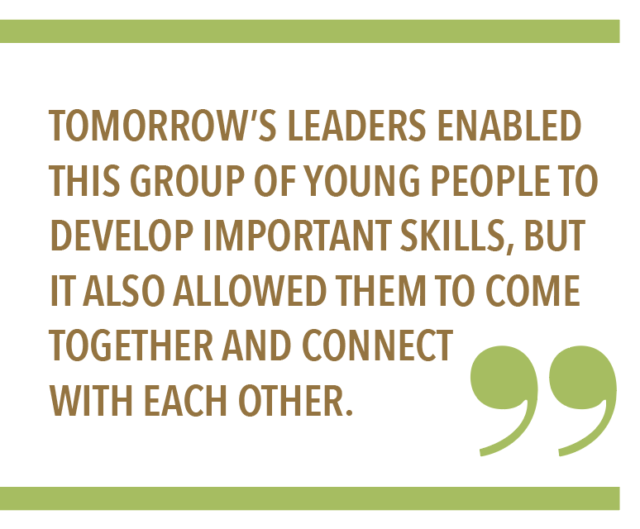 Through a partnership with GCDD, The Arc Georgia is continuing Alford’s vision to go deeper in developing critical skills for young people with disabilities.

GCDD has approved funds for The Arc Georgia to implement a second year of Tomorrow’s Leaders after the progress made by the first year’s cohort.

The second year will continue with the original cohort, where they will build upon the skills they gained during year one by planning and implementing an inclusive community project. 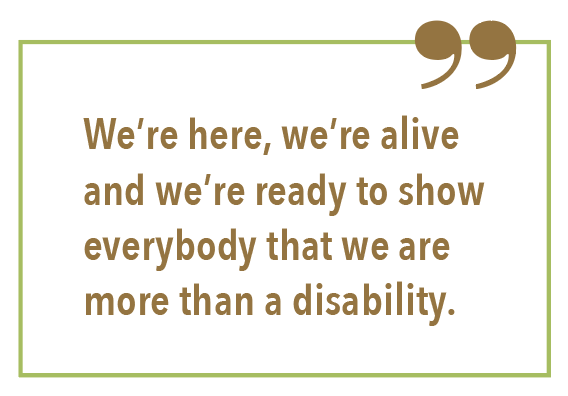 “The hardest part is to help us be able to have this advocacy,” said Haythorn. “I know it can be hard sometimes, but I’m telling you, when we do this, we are showing an impact in the world. We’re here, we’re alive and we’re ready to show everybody that we are more than a disability.”

The Arc Georgia supports people with intellectual and developmental disabilities (I/DD) over the arc of their lifetime.

Accessible Technology on Smartphones and Tablets for Users with Hearing, Cognitive, and Mobility Disabilities – Virtual