Erin Rachel Vinoski Thomas, PhD, MPH, Director of Health and Wellness at Georgia State University’s Center for Leadership in Disability, sat down with Making A Difference to share the findings of her research on how COVID-19 affected people with disabilities and direct support professionals. Watch the interview or continue reading.

In March, at the beginning of when we started to understand what the pandemic looked like, what COVID-19 was looking like and what it might develop into, we started to see a lot of information come out about how people with disabilities would be disproportionately at risk.

The research that we conducted had two major components. The first was an online survey. We conducted an online survey of 61 people with intellectual and developmental disabilities (I/DD) and 76 direct support professionals (DSPs) in May of 2020. Most of the people who participated in the survey represented the state of Georgia. There was some representation of people outside of Georgia, but it was mostly people from the southeastern region of the US. 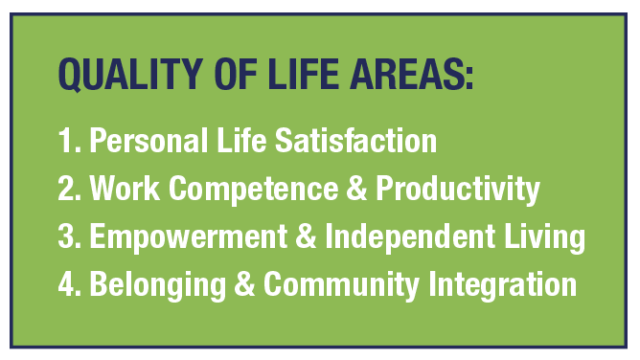 The survey that we used is called the Quality of Life Questionnaire. It has 10 questions in four different areas – including personal life satisfaction, work competence and productivity, empowerment and independent living and belonging and community integration. Those are the four really broad areas of quality of life that we’re exploring.

We found that both people with I/DD and DSPs experienced statistically significant declines in all four of those areas of quality of life that we measured. In general, surveys do a really good job of giving a quick snapshot of what’s going on. But surveys don’t always do a great job of telling us why something is happening. To understand why things are happening we really have to talk to people themselves. We need to understand their perspectives. We need to understand their experiences and their day-to-day especially in a pandemic situation where things really do change hour to hour, day to day.

Using Zoom or another virtual conferencing platform, we conducted interviews with eight people with I/DD and 10 DSPs. We did those interviews at two time points – the first was in July and the second was in September. 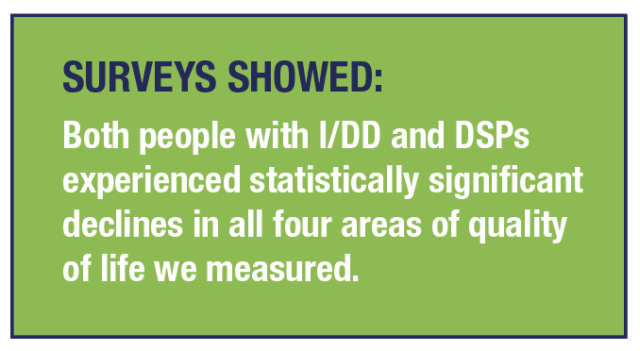 The last main finding for people with I/DD is a real sense of fear and feelings of uncertainty about the future. There were people who said “I just want someone to tell me when this is going to be over, how long this is going to go, because I need to be able to understand when I’m going to get back to that routine, or when I’m going to be able to see my family again, or have access to those supports that I had before the pandemic that have now changed.”

What we saw in the quantitative data that matched the qualitative data was that there were a lot of people with disabilities who just weren’t working anymore. They had jobs before the pandemic, and then their jobs were either gone because the entire business was shut down or their hours were cut. So people didn’t have that sense of being productive at work because they didn’t have jobs anymore. Those were two specific areas where we saw real steep decreases in quality of life for people with I/DD.

The DSPs that we interviewed talked about a lot of the same themes. By and large, people are experiencing the same things regardless of who they are. But specifically, DSPs experienced overwhelming burnout. That shouldn’t be a surprise to anybody. They also described a constant pressure weighing on them, not only to keep themselves safe just for their own health’s sake, but also to keep themselves safe so that they could keep other people safe. This idea that not only is my safety my responsibility, but someone else’s safety is also my responsibility – and I have to keep that in the forefront of my mind. 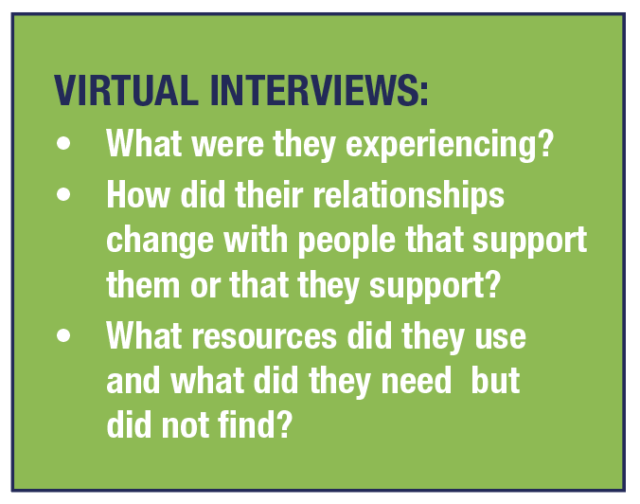 The other major finding among DSPs, and particularly among DSPs who are members of populations that have been historically excluded on the basis of race or ethnicity, is extreme emotional distress that was related to living and working as a DSP during COVID-19 – given the ways that it has been racialized and the ways that it’s been discussed as a racial or an ethnic virus – as a “Chinese Virus,” was a quote that was provided by one of the DSPs.

Also, the ways that the timing of this pandemic has intersected with what one of our participants called a “dual pandemic,” a pandemic of racial violence and racial tension in our country, given that COVID-19 has disproportionately impacted communities of color who are also simultaneously being impacted by violence and racial tension in our country. We didn’t directly ask questions about that, but as people started to talk about it, then we started to ask more questions about it. That is the beauty of qualitative research – the ability to ask more questions over time as you gain understanding of an issue.

For DSPs, the two areas that we saw the most substantial decreases in were personal life satisfaction and also belonging and community integration. The fact that the DSPs didn’t have that substantial decrease in work competence and productivity to me goes along with the idea that these are things that are just always present; they’re persistent. Burnout is persistent, and yes, it may be heightened during times of pandemic and in the time of COVID-19, but the decrease we saw at least in the numbers was not as substantial as other areas.

I do think that the aspects that we discussed about racism and the racialization of COVID-19 probably played into that substantial decrease in personal life satisfaction that people reported, and then again, belonging and community integration. We talked to DSPs in the interview phase of the study that mentioned again if they’re living in the place that they’re working, they weren’t leaving because it was dangerous. It was dangerous to them, and then by being dangerous to them, it was dangerous to the people that they were supporting. They didn’t have a sense of belonging and community integration because they weren’t seeing their communities. They weren’t being a part of their traditional community outside of work that they had previously had access to.