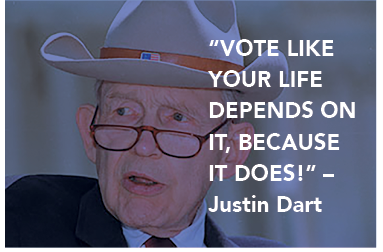 In this edition of Public Policy for the People, we will be focusing on the upcoming 2020 election, which sees key national and state seats up for grabs. This election will certainly be one for the history books, as much of our attention has been paid to the current COVID-19 pandemic, making this campaign season unlike any in modern history.

To prepare you for the upcoming election, we want to make sure you are an informed voter, not only on the candidates and their platforms, but also on your rights as a voter.

Let’s discuss which seats are up for election and where the candidates stand on issues important to the disability community.

FEDERAL RACES*
Candidates for President of the United States
Every four years, we elect the next incoming president. During this presidential election, we will choose between the current president and a challenger. We have been encouraged to see more robust disability plans during this presidential race than in years prior. Below is a brief overview of each candidate’s disability platform. 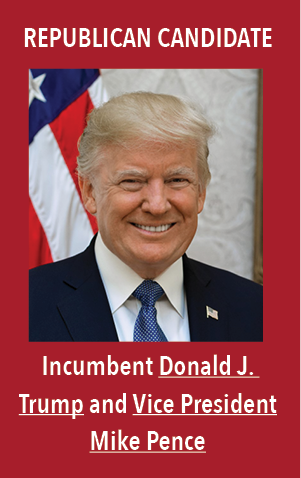 President Donald J. Trump is the 45th president of the United States of America representing the Republican Party. Trump ran as a member of the Republican Party, and he beat the Democratic challenger former Secretary Hillary Clinton by 77 votes in the Electoral College. You can read more about Trump’s campaign here.

As an incumbent president, we can look to Trump’s proposed plans, as well as his record on key issues while in office. Although disability policy is not specifically mentioned, we can look at the areas where we most often see policies created that impact people with disabilities: employment, education and healthcare. Employment: Trump touts his influence on an improved economy, which has seen record job growth and increased wages for workers. Of note, disability employment is not highlighted, and the unemployment rate for people with disabilities continues to hover around 70 percent. Education: Trump and his administration state their support on the expansion of school choice. It is important to note that many in the disability community have voiced strong concerns regarding school choice expansion, as private education systems are not bound to the same requirements to support children with disabilities as the public school system. Healthcare: Trump has called for the repeal of the Affordable Care Act insurance mandate, which means people would no longer be penalized for not having health insurance. However, concerning healthcare policy in the disability community, Trump has consistently proposed budget cuts to Medicaid and other disability-specific programs, such as the Special Olympics, which includes a strong initiative to improve the health and wellness of people with disabilities. Additional policy considerations: Access to Housing: Although no official statement appears on the campaign website, the candidate’s position on this issue is made clear in the Housing and Urban Development (HUD) agency press statement about its new budget. Some of Trump’s budget modifications include $2.8 billion to assist the fight to end homelessness; a record $425 million to boost healthy homes; and also $41.3 billion to help Americans pay rent. However, it is important to note that Trump’s budget proposal for HUD had push back from both Republican and Democratic lawmakers, as the proposal requested a 15.2 percent cut, which would translate to an $8.6 billion budget cut. Transportation: Although no official statement appears on the campaign website regarding transportation for people with disabilities, the candidate did address transportation for people with disabilities in his interview with the American Association of People with Disabilities (AAPD) in 2015. He states, “This is a critical question that must be dealt with by the federal government. We should integrate into our investments in infrastructure and transportation, assets and policies that provide for the services required by people with disabilities, to the extent possible.” 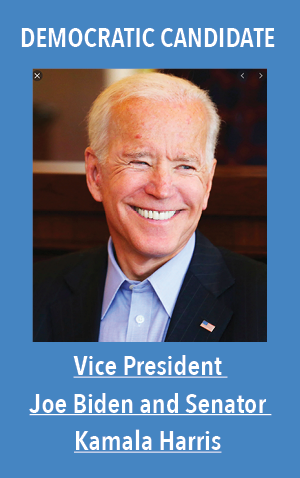 Joe Biden was the 47th vice president of the United States and former U.S. Senator from Delaware. He won the Democratic nomination for president in 2020. You can find more information on the Biden-Harris campaign website.

It is important to note that as a challenger, we do not yet have specific examples of what actions Biden has taken as president. We can, however, provide information regarding his promises on disability issues. Some of Biden’s disability policy proposals include:

Education: As a U.S. Senator, Biden supported the passage of the original Individuals with Disabilities Education Act (IDEA) in 1975 and has promised as president to fully fund IDEA. Biden has also promised to direct his Health and Human Services (HHS) department to ensure all eligible children receive Early and Periodic Screening, Diagnosis and Treatment (EPSDT) services. For older students, Biden has promised to increase funding for Transition and Postsecondary Programs for Students with Intellectual and Developmental Disabilities (TPSID), an initiative that provides funding for inclusive postsecondary education (IPSE) programs in Georgia.

Healthcare: Biden has promised to increase access to home and community-based services (known in Georgia as NOW/COMP, ICWP and CCSP Medicaid waivers); invest in the direct care workforce; and support informal and family caregivers.

Housing: Biden has promised to expand affordable, accessible housing options for people with disabilities and has indicated he will secure investments to the Supportive Housing for Individuals with Disabilities (also known as “Section 811”) programs.

GEORGIA-BASED RACES TO WATCH
For the past few decades, Georgia has been considered a solidly Republican state; however, over the last few years, Georgia has started to poll toward the middle of the political spectrum, which has created increased interest and investment in our U.S. Senate and House of Representatives races. In this section, we review key federal races to watch in Georgia.

Georgia’s U.S. Senate Race: Perdue/Ossoff
In one race, we have incumbent Senator David Perdue (R) running against challenger Jon Ossoff (D). Both are likely familiar names, as Perdue has served in the U.S. Senate since 2015, and Ossoff ran for Georgia’s 6th congressional district during the 2017 special election, which was one of the most expensive House races in the country.

Although neither have a specific disability platform, you can find out more information about their stances, including Perdue’s voting history below: 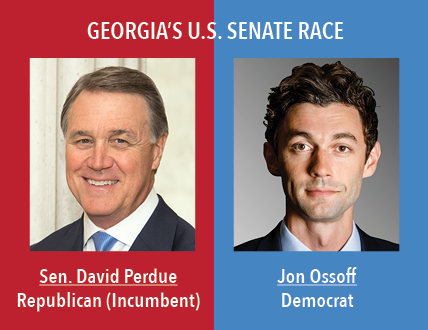 As both Republican candidates have served in public office, you can visit the links below to learn more about their voting history.

DEMOCRATIC CANDIDATES
Please click on each candidate’s name to be taken to their “Issues” webpage to learn more about each candidate’s positions. As Ed Tarver was a former US Attorney, Southern District of GA, click on Ballotpedia for info as well.

Key Congressional District Race to Watch: Georgia’s 6th District F
or decades, Georgia’s 6th district for the U.S. House of Representatives has been a solid Republican seat whose winners – Newt Gingrich, Johnny Isakson and Tom Price – became major figures in the Republican Party. Georgia has slowly shown more diversity within its elections, which is why the 6th district is on our hot list of races to watch. The two candidates for the current 2020 election include: 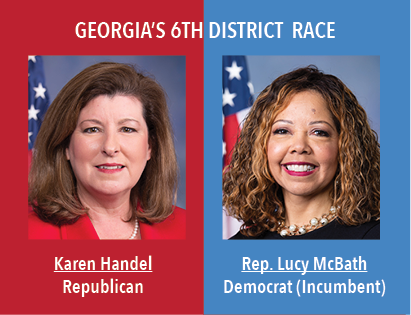 As both candidates have served in public office, you can visit the links below to learn more about their voting history.

Key Congressional District Race to Watch: Georgia’s 5th District Georgia’s 5th congressional district was represented by the late congressman John Lewis since 1987. For the first time in over 30 years, this district will now be represented by someone new, so we included it in our list of races to watch. Lewis originally won the 2020 Democratic primary race for the seat before his unexpected passing. Georgia’s Democratic Party then selected state Senator Nikema Williams to serve as the Democratic candidate on the ballot. The two candidates include: 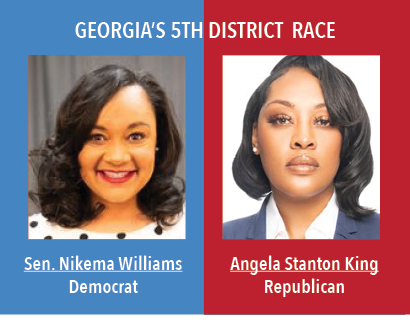 Visit Open States online to find out which state senate and house district you live in, and the current state legislators who represent you. You can even see the committees the legislators serve on and the bills they have sponsored. Visit Ballotpedia to learn more about the election history of your state-level districts and whether or not your current legislator has a general election challenger.

* It is important to note that GCDD does not endorse any candidate and that the enclosed information encompasses only a small piece of a larger political platform for each candidate. We encourage you reach out to them with questions of your own – and to vote.