The following is an edited excerpt from the Expert Update interview led by the Georgia Council on Developmental Disabilities (GCDD) on employment for people with disabilities. 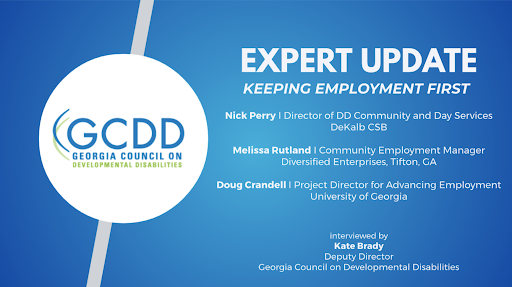 Kate Brady: There have been tremendous budget cuts in Georgia, which have resulted in people losing statefunded family support and specifically employment services. I thought I’d first go to Melissa and Nick and hear how you’ve seen the impact of these cuts play out in your provider organizations.

Nick Perry: I’ve seen quite a bit. Individuals who recently gained employment have lost the opportunity to have extended supports and services funded as result. Providers who are unable, or possibly unwilling, have found it difficult to support individuals, specifically new clients.

I’ve seen the creation of a new waiting list through [Georgia Department of Behavioral Health and Developmental Disabilities]’ Competitive Integrated Employment program that is allegedly replacing Employment Express (EE). Those funds are very limited, so once they’re depleted, there’s a pending list the individuals will be placed on.

On a positive note, there are individuals out there seeking employment who have actually gained employment and providers who are still willing to continue supporting those individuals despite the loss of funding. I’m seeing a need for a different funding model.

Kate Brady: Melissa, are there experiences you’ve had regarding the recent cuts that you’d like to reflect on?

Melissa Rutland: What Nick said is spot on. Family supports for some people using state-funded services are the only supports they’re eligible for. When they lose that, those people are at risk because even though it was limited, it helped them. So, I worry about them because they no longer have funding.

With the change in EE, you have to think about agencies like mine that received vocational rehabilitation (VR) referrals. EE helped agencies because once someone was placed and utilized all the VR funding, they knew they had it to help sustain that person. Agencies that are not in the financial shape that our agency is in cannot carry those people.

But, if you think about the [VR] contract that says if you place someone after you’ve lost VR funding, you’ll cover them for the lifetime of that job with two contacts per month. While my agency might do it, a newer agency or service center that is trying to switch over to community-based services is not going to be able to do that. It’s going to be a struggle, and I see that as setting back employment.

Kate Brady: So, Doug, I am particularly interested in your thoughts related to Nick’s points around the funding model and how leadership at the state level can put forward a model that aligns with our stated values of employment.

Doug Crandell: Every time we have confusion and uncertainty, you’re going to have delays and lose momentum.

We can use that as an excuse forever. Yes, we have to have state cuts, but why you would cut employment supports is beyond me.

There are other models – Tennessee is a great example above us – their CHOICES home and community based services waiver is the same thing we have. [Georgia waivers] have to be revamped [to align with Tennessee’s] for a new generation of young people, for providers that are trying to change over. There has to be an incentive to do that. There has to be flexibility.

Some of those services are benefits counseling, counseling with families or someone who went to a sheltered workshop for decades. Providers, if we’re encouraging folks to leave places, we’ve got to be able to reimburse people.

On the flip side, we also need fidelity, right? It’s difficult to achieve Employment First, Community First, if the state and providers can’t come to the table and recognize the true spirit of what the Workforce Innovation and Opportunity Act asks us to do – to totally collaborate and prioritize folks with significant disabilities, getting evidence-based services.

This is a tremendous opportunity to get serious about how we’re going to fund true supports for people. 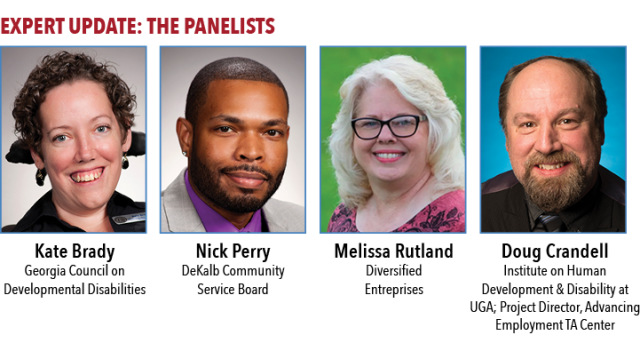