For the last 35 years, the Quick Response Research Award Program has awarded small grants to a variety of academic institutions to support social and behavioral science in the wake of disaster.

As the pandemic began last year, Georgia State University’s Center for Leadership in Disability (CLD) was selected as an award recipient, to explore the effects of COVID-19 on quality of life of individuals with intellectual and developmental disabilities (I/DD) and direct support professionals.

After receiving the award, Erin Vinoski Thomas, a research assistant professor at CLD, began a round of surveys to investigate. Daniel Crimmins, the director of CLD, says the project naturally led to a conversation with the Georgia Council on Developmental Disabilities (GCDD). GCDD then provided additional funding, so Thomas could conduct more surveys and in-depth interviews.

The Quick Response Research Award program is an effort by the University of Colorado, Boulder’s Natural Hazard Center, and is funded through a grant from the National Science Foundation.

“The council essentially had a mechanism so they could act quickly,” Crimmins said, “to really come to this better understanding of how the pandemic was affecting people with I/DD.” 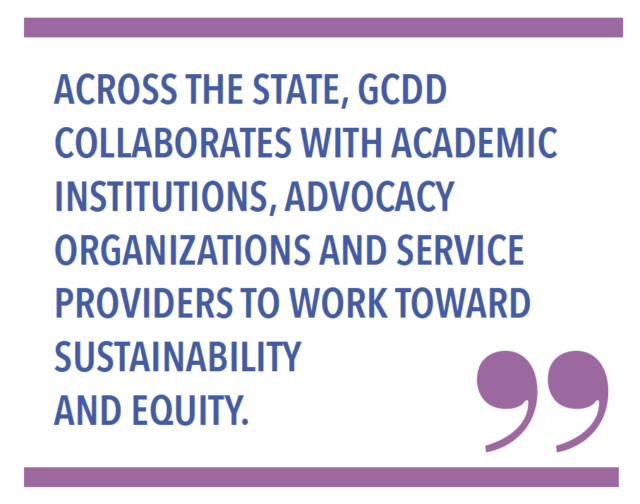 GCDD partnered to expand and deepen the impact of work done through the Quick Response Program by contributing funding and support to ensure it can best serve those with disabilities who live in Georgia.

Crimmins says that early mainstream reporting around the impact of the pandemic on this particular community was largely focused on quantitative data.

“No one knew what people were thinking about it, how they understood it, or how it was impacting them,” Crimmins said.

Across the state, GCDD collaborates with academic institutions, advocacy organizations and service providers to work toward sustainability and equity. GCDD seed funding and guidance has played a crucial role in stabilizing many of these groups.

Another GCDD partnership with the Advancing Employment Technical Assistance (TA) Center at the University of Georgia’s Institute on Human Development and Disability (IHDD), works to advance employment for Georgians with disabilities, while offering resources to state agencies, employers, jobseekers and providers of employment supports.

“If it wasn’t for GCDD, then we wouldn’t have a TA Center,” said Doug Crandell, the project director for Advancing Employment and an expert in disability employment policy at IHDD.

Crandell says that the TA Center relies on GCDD funds to support its main infrastructure. He notes the center receives some funding through the Georgia Vocational Rehabilitation Agency (GVRA), but it does not receive money from any other state agencies. He says going after federal money in other projects allows the center to continue making an impact.

In August 2020, the Administration for Community Living (ACL) announced a total of $1 million in grants meant to establish transition pilot programs for youth and adults with I/DD. The grants were awarded to 10 University Centers for Excellence in Developmental Disabilities (UCEDDs), and UGA’s IHDD is one of the grant awardees.

Crandell says the one-year pilot project will focus on the transition from college to work or graduate education for students on the autism spectrum, and it will seek to increase successful transitions. The pilot will be a collaboration with the CLD at Georgia State and GCDD, as well as with self-advocates and other partners.

Crandell points to one home-grown project from earlier this year, where Advancing Employment partnered with the Pineland Community Service Board (CSB) in Statesboro, GA.

Through the partnership, the center completed visual resumes for three men in the city, and State Representative Jan Tankersley agreed to be an employment reference for them.

“We get to help Pineland CSB, not only these three men, but continuing to help them build their competitive, integrated employment program,” said Crandell.

GCDD has also partnered with the Georgia Advocacy Office (GAO), the state’s designated protection and advocacy system for people with disabilities in Georgia. For the last three years, with GCDD resources and funding, GAO has operated the supported decision-making (SDM) project, working to increase adoption of SDM as an alternative to guardianship in the state.

GAO recently applied to become one of the first three states to form a community of practice through an ACL-supported, national SDM project, building on the success of a previous SDM initiative. Twenty-six applicants have been narrowed down to six finalists.

GAO Executive Director Ruby Moore says the ACL project will develop at a national level over the next five years, but the organization will support the creation of local programs by providing resources in 11 different states, including the initial three. 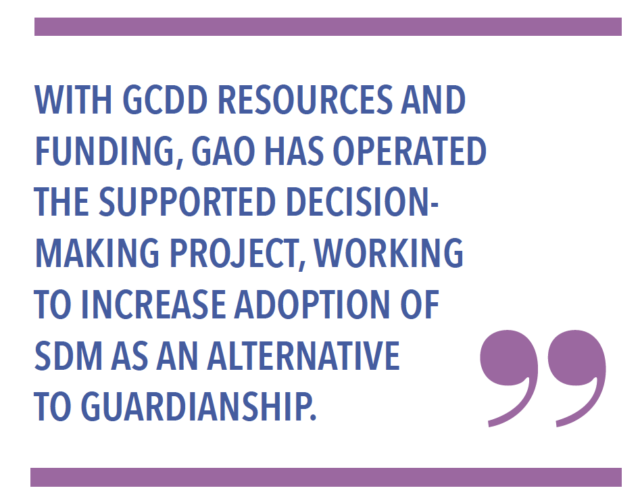 Moore says that if Georgia is selected by the ACL, the SDM community of practice will begin developing a cohort of youth leaders and ambassadors across the state. “It’s a very powerful model for growing the program and targeting high-priority growth … sort of cutting off that pipeline to guardianship that happens as people are coming of age.”

Moore is excited by the potential opportunity to collaborate on a national level, while receiving an invaluable resource infusion. She also notes that good collaboration and a strong network in the state of Georgia have made all the difference for their own collaborative SDM project.

“Anytime two states trying to do the same thing talk to each other, you’re going to find nuances and differences in the way that the work got approached, what the partners were, what unique characteristics those projects have,” Moore said. “This grant allows for communities of practice to develop simultaneously across the country in at least 11 states. Even if Georgia doesn’t get picked as one of the first states, our project will go forward. And some of the principles from the national grant are in Georgia, or are working in Georgia, already.”