It’s been another busy few months on the federal policy front, both with ongoing fights against harmful policies but also opportunities to advance disability priorities, and we have more recently been actively involved in the response to the COVID-19 pandemic. At the same time, a lot is happening in Georgia’s Medicaid system, including Georgia exploring some of the concerning Medicaid policies we’ve been tracking nationally.

Congressional Response: Congress has already passed three bills in response to the COVID-19 outbreak. The first was an emergency funding bill. The second bill, Families First Coronavirus Response Act (H.R. 6201), was an important first step in responding to the needs of people with disabilities. It included increased funding for states’ Medicaid programs and federal nutrition assistance programs and provided emergency paid leave and free coronavirus testing.

The latest response bill, Coronavirus Aid, Relief and Economic Security (CARES) Act (H.R. 748) included some of the disability community’s priorities as well. It ensured that direct cash assistance to people during the crisis is available to all people (including people on SSI and SSDI) and won’t count against means tested programs like Medicaid; and provided additional funding for education, housing, nutrition, Centers for Independent Living (CILs) and some aging programs.

However, many of our priorities were not included, such as additional grant funding for the home and community-based services (HCBS) on which many people with disabilities rely; paid leave for all caregivers; recognition of direct care workers as essential personnel; and additional funding for Medicaid, Social Security, and SSI. We are advocating for these priorities to be included in the next round of coronavirus relief legislation, which Congress has already begun developing.

Medical Rationing Guidance: We have seen increasing concern about disability discrimination in medical treatment during the coronavirus pandemic, particularly when it comes to accessing treatment and the quality of treatment provided. In response to extensive advocacy, including complaints filed by the Center for Public Representation (CPR) and partners, the US Health and Human Services Office of Civil Rights (HHS OCR) issued guidance on March 28 affi ming that federal disability rights laws apply to decisions about access to care during the coronavirus pandemic. CPR and other national advocates have issued this document to assist state advocates working on this issue, and we are working hard to ensure the rights of people with disabilities are not violated when they seek treatment for COVID-19. 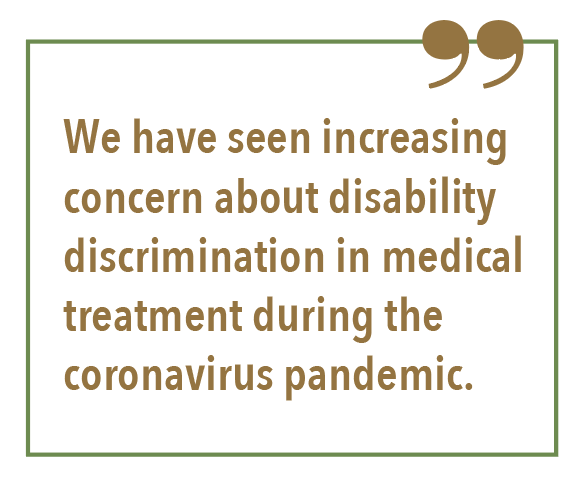 Updates on Medicaid Policies with Impacts for Georgia:

Block Grant Guidance: On January 30, the Centers for Medicare and Medicaid Services (CMS) announced new guidance. that gives states the option to fund their Medicaid programs using block grants or per capita caps for certain populations through Section 1115 waivers. Block grants and per capita caps both provide states with a set amount of money, rather than funding for the actual cost of services provided, as Medicaid normally does. This pressures states to cut benefits, eligibility or both if they spend more than the set amount. People with disabilities will be impacted by this new policy. Even though people who qualify for Medicaid on the basis of disability (for example, because they qualify for Social Security Disability Insurance) are not among the groups that the new policy can apply to, many people with disabilities on Medicaid are eligible for other reasons and are among the groups targeted by the guidance.

Also, if these funding caps cause shortfalls in states’ Medicaid budgets, all Medicaid participants could see their services cut. Georgia has expressed interest in submitting an 1115 waiver under this new guidance. Georgia Council on Developmental Disabilities (GCDD) and CPR have created a fact sheet to help Georgians understand the potential impact. We will monitor those efforts and continue to keep you updated.

HCBS Settings Rule: As we’ve written about in this column before, Georgia is in the process of implementing their statewide transition plan to comply with the Medicaid Home and Community Based Services (HCBS) Settings Rule. The rule ensures that all people receiving HCBS have the full benefits of c mmunity living, including access to the broader community, opportunities for competitive, integrated employment and control over their daily lives. States have until March 2022 to fully implement the rule. In February of this year, Georgia put out for a 30- day public comment its final plan for complying. GCDD and partner organizations submitted comments raising concerns about the plan. Georgia will have to respond to those comments before it submits the plan to CMS for approval. We will keep you updated as Georgia finalizes, and CMS considers the plan.

Affordable Care Act Lawsuit: On March 2, the Supreme Court agreed to review the lawsuit challenging the Affordable Care Act (ACA). The lawsuit was brought by a group of states challenging the  constitutionality of the ACA’s individual mandate and argues that the entire ACA, including its protections for people with pre-existing conditions, should be struck down. A decision is not expected until next year because the court declined to expedite its review and hear the case this term. As we’ve noted previously, the ACA remains fully in place while the lawsuit is ongoing.

Disability and immigration advocates across the country continue to fight to overturn the federal government’s new public charge rule. The rule prohibits people who use or might use public benefits (now including Medicaid HCBS) from  getting a visa or green card, which disability advocates argue is illegal disability discrimination.

While advocates had initially succeeded in stopping the new rule while the lawsuits move forward, on January 27, the Supreme Court issued an order allowing the rule to go into effect while the litigation continues and on February 24, it went into effect nationwide. It is vital that people understand what it does and does not mean, and we encourage everyone to check out our updated fact sheet and explainer to make sure they understand the rule.

Thankfullye, sinpornse to COVID-19, US Citizenship and Immigration Services (USCIS) announced last month that it “will neither consider testing, treatment, nor preventative care (including vaccines, if a vaccine becomes available) related to COVID-19” in making public charge determinations even if it’s paid for by federally-funded programs, like Medicaid. This means that immigrants can receive treatment without an impact on their immigration status.

GAO v. Georgia (GNETS): On March 19, a federal judge denied a motion to dismiss the lawsuit filed by the Georgia Advocacy Office, CPR, The Arc Georgia and other partners, that claims Georgia is illegally segregating students with disabilities in the Georgia Network for Educational and Therapeutic Supports Program (GNETS) in violation of the Americans with Disabilities Act, Olmstead and the US Constitution. The judge decided the plaintiffs had stated a claim for violations of federal law and that the case can now move forward. We’ll keep you updated as this case proceeds.

MFP was ultimately only given a short-term extension in the budget Congress passed, which was intended to create pressure to pass a larger healthcare package, including prescription drug reforms, before their Memorial Day recess. However, because of the unexpected need for Congress to focus its energies this spring on responding to the coronavirus pandemic, MFP received another short term extension until November 30 in the CARES Act, which we discussed earlier. We will need your help later this year to help push for permanent funding for this important program.

Disability and aging advocates have been working for over a year developing this new legislation, which we discussed briefly in our last column. It would provide additional funding to states to build up the infrastructure of their Medicaid-funded HCBS systems. On February 12, Senator Bob Casey (D-PA)  introduced the Senate version of the bill (S. 3277), and we expect the House version, which will be bipartisan, to be introduced shortly. Sen Casey’s office released a brief fact sheet on the Senate version of the bill. Find more information on that bill and the House version when it’s released, along with other resources and media.

These updates represent only a small portion of what we’re working on. For more on our work, visit our website and connect with us on Facebook and Twitter.

Alison Barkoff and Erin Shea work on policy and litigation related to community integration and inclusion of people with disabilities, including Olmstead enforcement, Medicaid policy, employment, housing and education.